Earlier today I saw a lot of “Top Lists” for the year of 2015 and this led me to throw up something on Twitter. Then I quickly realized I should dedicate more time to my favorite films from the years. There’s not many times I get to be wholly positive, so instead of posting a clumsily thrown together list I made in Notepad, here’s a detailed explanation of five of my favorite films from 2015. I would have gone for a full top ten, but I really didn’t see that many movies I liked enough to put on a list. By the way, Sicario (with Emily Blunt in FBI gear up top) is not on this list, although it makes for a great feature image.

I’ve written a little bit about how one aspect of this movie bothered me, but that doesn’t do justice to how pleased I was with the overall result. J.J. Abrams and company managed to bridge the gap between the old fans and new fans and gave us the “Episode 1” that everyone wanted. It’s almost like we can pretend the prequels never happened. Unfortunately, there’s already a movement among big-time Star Wars fans that say the film had “too much fan service,” but I think these complaints can only be had after leaving the theater and realizing you liked the movie. The Force Awakens is the first time that audiences cared more about new characters than old ones, but the creators didn’t know that we’d like Rey, Finn, or Poe, so we got a little glimpse of who they are instead of focusing on them completely. As someone who has never been a huge Star Wars fan, this film has gotten me onto the hype train, to the point that I’ve reinstalled Knights of the Old Republic and I’m considering a replay. It’s easy to feel good about Star Wars right now, as long as I push back the thought that the “marvelification” of the franchise will happen any minute now.

I wrote on social media immediately after seeing this movie: “The Gift is a great movie because it advocates all my world views. Don’t get married. Don’t have relationships. Don’t have friends. Don’t invite people over. Don’t meet people. Never trust anyone.” Four months later, I think this still accurately represents why I liked The Gift. If not for that reason, I think it’s one of the best “It’s good, just watch it,” experiences you can have. I went to see The Gift on the premise that it was about a “creepy neighbor,” and that’s it. It’s a film that plays with your expectations more than once. The less you know about the movie the better. In other words, it’s good, just watch it.

As far as I’m concerned there were three James Bond movies released this year: Spectre, Kingsman, and Missions Impossible: Rogue Nation. I could go into the details of why they latter two are totally James Bond movies but you’re better off skipping Rogue Nation and just watching Kingsman. A kid gets drafted into British secret service and has to infiltrate an evil lair and save the world using gadgets. All he needs is a double 0 in front of his name. Kingsman had the benefit of being released earlier in the year, several months before Spectre brought “being fun” back to Bond, so at the time it was a breath of fresh air to the formula that had been bogged down by the self-seriousness of Skyfall and Quantum of Solace. Kingsman is funny, charming, but also smart. All of this is made clear by the inclusion of Colin Firth in the main cast. When you read about a movie like Kingsman, and see someone like Firth being in the cast, you’d usually think “I wouldn’t think Firth would do something so brain-dead,” well that’s because it’s not. Like with many British films, there are layers of classism stitched into the fabric and Kingsman is no different. You walk away wondering if there was something more going on. Even if there wasn’t, it was the most fun I had at the theater all year. P.S. Love Samuel L. Jackson’s costume design. 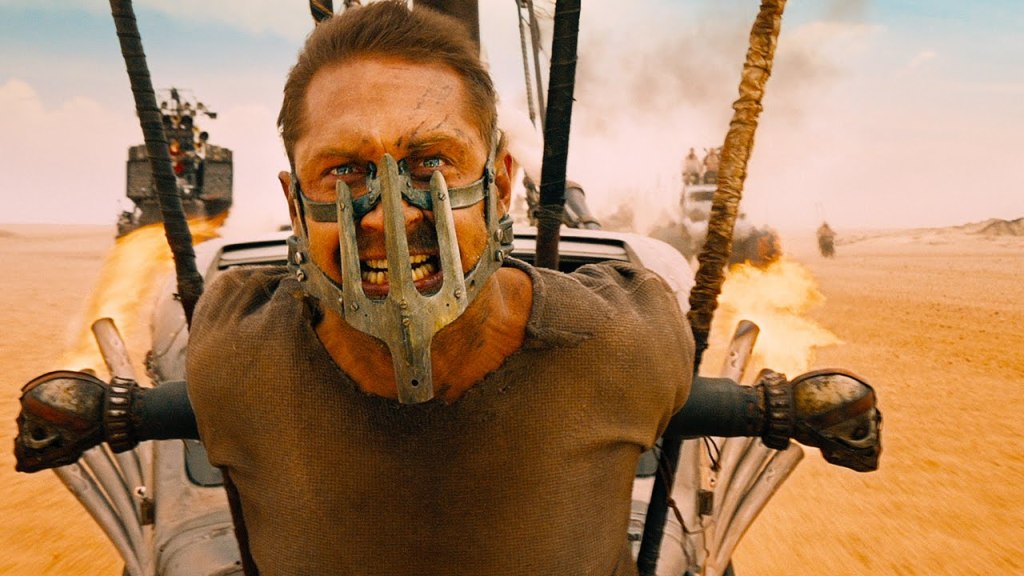 Mad Max: Fury Road is a movie that’s story is told almost entirely through pictures. That’s a statement that can’t be said for most movies, and that’s okay. We have writers, actors’ performances, witty dialog, and ways of conveying information that’s pleasing to audiences outside of just pictures. In reality how many stories could you tell with just pictures? Still the novelty of watching Fury Road and realizing how much I knew about the world just by watching it had a big effect on me. Take for example this fight scene between Max and (the real main character) Furiosa. We learn key things about both characters: Furiosa is willing to kill Max, Max is not willing to kill Furiosa or the Wives, Max will work with Nux, but only to the extent that he has to, Nux has a deluded sense of friendship, and it appears that both Max and Furiosa want to use the truck to get away from the incoming horde. There’s no “we’re on the same side here Max!” scene between Furiosa and Max, because the audience already knows. The entire movie assumes a level of intelligence from the viewer. The low bar that they have seen the visuals on screen and were paying attention. But this isn’t some pretentious nonsense from film class. It’s an action movie made by an old guy who’s been making action movies since the 70s, and it is fucking rad.

Ex Machina automatically had to be in my Top 5 after I realized it had started not one, but two, heated debates between friends and family over the implications of the ending of the film. It’s nothing incomprehensible like 2001: A Space Odyssey. It’s a fundamental understanding of what you believe “life” to be and if you think that definition translates when it’s being applied to biology versus synthetics (or to use simpler words: humans versus robots). Ex Machina is a film that sparks conversation and I envy any work of art that can accomplish that. That alone would force me to give it a recommendation but the rest of the film is also a marvel. It’s small in scope, with only four characters and “one” location, but it covers huge ideas like artificial intelligence, human connection, and the definition of “life.” It’s short in runtime, barely making it past an hour and a half, but you learn so much about the characters, their motivations, and quickly learn about complicated concepts. It’s a tightly written film, every second has a purpose and various moments have the potential to stay with you long after it’s over (I know which one has stuck with me the longest). On top of all that it’s undeniably charming thanks to the best performance from Oscar Isaac I’ve seen from him yet, as the super-genius super-self-centered Nathan. His character is a joy to watch and he jives well with co-stars Domnhall Gleeson and Alicia Vikander who do their part to service the film.

There isn’t a weak point to Ex Machina and every aspect of it I try to think about just inspires another sentence or two of praise, and I haven’t even mentioned the set design or soundtrack. Top 10 lists (or Top 5 lists) are always subjective and graded on nothing, but Ex Machina is the film that affected my life the most and made me love the medium more than I already do. I think that’s justification enough to praise it as my favorite for 2015.